For several years now, we have kicked around the idea of putting strain gages on a gun barrel.  Why might we want to do this you ask?  Two reasons: first, we like target shooting, and second, we’re huge instrumentation nerds.  Well, we finally did it and this is the first in a series of blogs about the instrumentation of a shotgun.

The first order of business was to obtain a firearm.  Dave, our fearless leader, generously offered up his Remington 870 Action Express 12-gauge shotgun.  His particular model can chamber both 2-3/4” and 3” shells.  After making sure he understood I’d be taking sandpaper to the finish on his shotgun (he said anything in the name of science) I got to work.  So we knew we wanted to put strain gages on the barrel but what else might we want to capture with the data acquisition system?  We decided that thermocouples to capture the rise in temperature of the barrel might be interesting.  The next thing that popped in our heads was to put an accelerometer on the stock to capture the impact of the shotgun against the shooters shoulder. 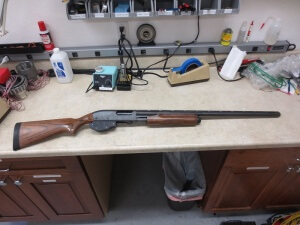 So we decided to measure barrel strain, barrel temperature, and acceleration of the gun.  The next thing to think about was what kind of strains we wanted to measure.  It was obvious to us the strain due to hoop stress was going to be interesting but maybe the longitudinal strain might be as well.  So we chose two-element, 90 degree rosettes, also referred to as Poisson gages.  Further we decided it would be interesting to place gages at a few cross-sections down the length of the barrel to see if we could capture and discern the stress as the round traversed down the barrel.  We decided to place the first gage about two and half inches from the receiver to make sure we were away from the thicker section of the barrel that occurs around the chamber.  At the other end of the barrel, we placed the 3rd gage short of barrel choke to avoid any influence from it.  The second gage split the difference between the others.  I placed two skin temp thermocouples on the barrel between the strain gages and wired everything back to the stock. 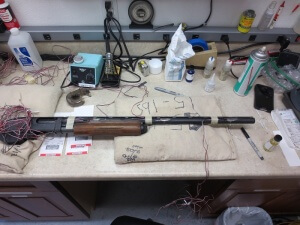 After hooking the strain gages up to our eDAQ (data acquisition system) using a quarter-bridge, 3-wire configuration, I did my “dummy” checks to make sure all the elements were responding as expected.   The thermocouples were also checked at this time.  Since the accelerometer was going to be installed in the field, we were ready to pack up and head out to our local shooting spot.  The details of which will come in a future blog so stay tuned!