The next time you find yourself driving through North Dakota–as my wife and I did back in June—and you’re looking for something interesting to see, I would suggest a visit to the “Ronald Reagan Minuteman Missile State Historic Site”. Located in Cooperstown (about 21/2 hours northeast of Bismarck, 40 miles north of I-94), the site consists of the “Oscar-Zero Missile Alert Facility” and the “November-33 Launch Facility”. Part of the 321st Missile Wing, these two facilities were just two components of a cluster of Minuteman intercontinental ballistic missile launch sites—facilities that played an integral part in the Cold War with the Soviet Union.

Alternatively, if you find yourself in the “other” Dakota (i.e., South Dakota), the National Park Service operates a similar National Historic Site at another Minuteman missile facility, “Delta-01”, approximately 20 miles southeast of Wall, South Dakota.

On our trip through North Dakota, after first seeing a video, a tour guide took us down into the underground, concrete encased, steel chambers (or “capsules” as they’re called) where the future of the world hinged on the turn of a key….well, two keys actually, since that’s what it would have taken to launch the missiles on a verified order from the President. 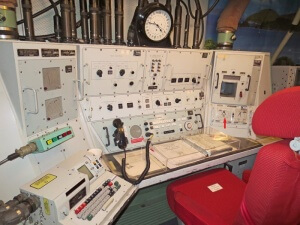 Minuteman Launch Control Panel at Oscar-Zero
The red arrow shows where the key is inserted to launch the missiles…in conjunction with a simultaneous turn of the key at a second panel across the room.

From the outside, the launch control facility at Oscar-Zero isn’t particularly imposing…what with its simple chain link fence, and single-story, typical ‘60’s vintage buildings. But once inside, after taking the elevator down 60 feet below ground level, the facility is much more impressive—and considerably more secure, with an 8-ton, 41/2-foot thick blast door separating the launch control capsule from the elevator shaft, and a similarly-thick but considerably taller and wider blast door separating the elevator shaft from the equipment capsule…..and for additional “survivability”, the platforms within the capsules are suspended on gigantic “shock isolators” to reduce the shock wave effects in the event of a nearby nuclear strike. 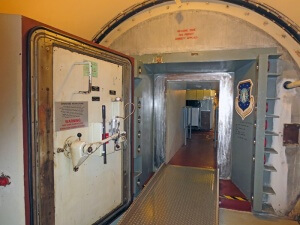 Blast Door Leading into Launch Control Capsule
The red letters above the door read “No-Lone Zone—Two Person Concept Applies”….a safeguard against a single person attempting to launch the missiles by himself–or herself.

The Oscar-Zero facility was completed in 1965 and remained operational for over 30 years before being decommissioned in July 1997 as the result of the Strategic Arms Reduction Treaty (START) between the Soviet Union and the United States. The Alert Facility (i.e., the “Oscar-Zero” control center) had control of ten missiles, dispersed so that no two missiles or the control facility were any closer than three miles from each other. Initially outfitted with 1.2 megaton, single-warhead, Minuteman II missiles, the launch sites were modified in the 1970’s to accommodate Minuteman III missiles, each of which carried three, considerably smaller but more accurate, 170 kiloton warheads, mounted on “MIRV’s”, or Multiple Independently Targetable Reentry Vehicles. 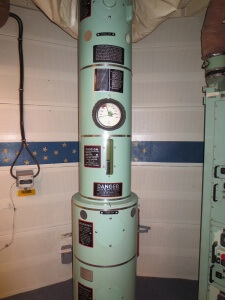 Shock Isolator in Equipment Capsule
The pressure gage was reading “zero” during our visit, which presumably means the system was deactivated….but I noticed that the “green band” on the pressure gage—where the pressure would have been read during service—was from 20,000 psi to 22,000 psi…..quite impressive

As you might expect, the Minuteman missiles underwent several upgrades over the years, but typical performance specifications included a range of over 7,000 miles, a maximum speed of around 15,000 MPH, and an apogee (maximum altitude) of around 700 miles….all of which translates to a travel time (one-way trip, of course) of less than 30 minutes to targets in the Soviet Union (or, nowadays, since the breakup of the Soviet Union, to Russia). And just to put that in perspective, it would take less time for our missiles to strike Russia—or for theirs to strike us—than it takes many of us to drive home from work in the evening…..not a particularly comforting thought, is it, particularly when you consider that once they’re launched, they can’t be recalled?

The tour at Oscar-Zero not only includes the underground launch control capsule and equipment capsule, but the ground-level crew living quarters, complete with mess hall, sleeping quarters, and lounge.

The tour of the November-33 launch facility (i.e., the hardened silo) is self-guided and is limited to the above-ground portion of the facility. There’s not a lot to see above ground, but there are several information boards describing what’s there below ground. The one thing that struck me (figuratively speaking) was the silo cover (or “Launcher Closure” as it’s called), a 110-ton, horizontal, steel/reinforced concrete slab, mounted on rails and triggered by ballistic gas generators that allow it to be slid open in a fraction of a second… rather violently, I would assume…..probably to the extent that you wouldn’t want to be standing in its path when the “go” button is pushed!

All in all, for someone who grew up during the Cold War, watching the video about the facility and seeing first-hand the control panel from which the missiles would have been sent on their way brought a bit of a chill to me….sure is nice that we didn’t get the “opportunity” to actually launch anything in anger from the facility…and of course, it’s just as nice we weren’t on the receiving end of a similar launch from the Soviet Union!

Below are a few historical photos of the facility I found online at Wikimedia Commons.

…and for more info on the Oscar-Zero site in North Dakota and the Delta-01 site in South Dakota, check out these websites: 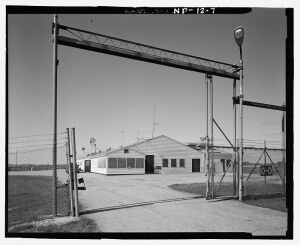 Entrance to Oscar-Zero Launch Control Facility
(U.S. Government public domain image)
The image above is a photo taken after the base was closed, prior to its re-opening as a historic site….the boarded-up windows are now uncovered. Note the “high security” chain link fence to keep unwanted visitors off the property…but I suppose when your front door is 41/2 feet thick and located 60 feet underground, a wimpy property fence isn’t your only safeguard against unwanted visitors…..

The image above is a photo taken after the base was closed, prior to its re-opening as a historic site….the boarded-up windows are now uncovered. Note the “high security” chain link fence to keep unwanted visitors off the property…but I suppose when your front door is 41/2 feet thick and located 60 feet underground, a wimpy property fence isn’t your only safeguard against unwanted visitors….. 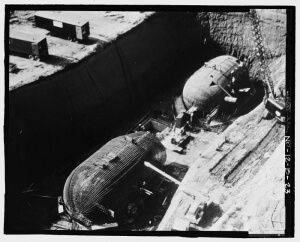 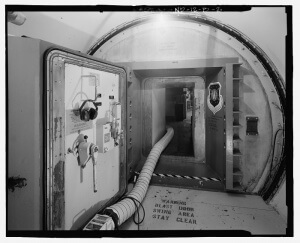 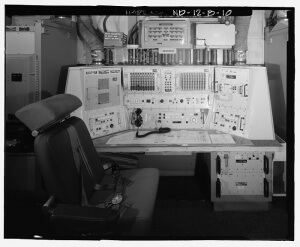 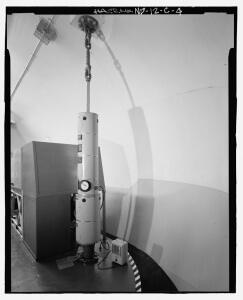 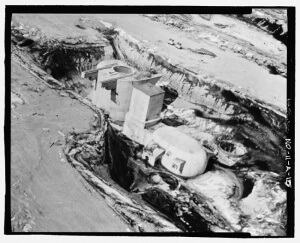 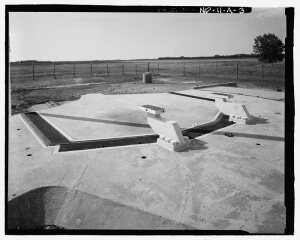 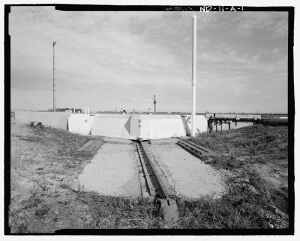 Missile Silo Cover
In the moments before launch of the missile, the 110-ton silo cover is slid open on rails by a piston assembly that’s activated by ballistic gas generators.
(U.S. Government public domain image)