You probably heard the news last month about how scientists have now confirmed another of the predictions made by Einstein’s General Theory of Relativity just over a century ago, namely, the presence of gravity waves….gravity waves being the predicted “ripple” in the fabric of space-time caused by cataclysmic gravitational events…events such as the collapse of a supernova core, or rapidly rotating neutron stars, or in this case, the merging of binary black holes. (Actually, the gravitational events don’t have to be “cataclysmic” to generate gravitational waves—according to the scientists, any accelerating mass (that’s not cylindrically or spherically symmetric) will generate gravitational waves, but the waves themselves are so incredibly minute that it takes a cataclysmic-sized event to generate waves that are capable of being detected.)

The detection was made on September 14, 2015 but not officially announced until earlier this year, on February 11, 2016, due to the need for scientists to meticulous scrutinize the data, so as not to find themselves in the embarrassing position that another group of scientists found themselves in last year when they had to retract an announcement made in March 2014 that gravity waves had been detected, based on signals received by the cosmic microwave polarization telescope at the South Pole…..only later to find that the “detection” was in fact, interference from interstellar dust.

The detection last September was made at two, highly-sensitive, identical “Laser Interferometer Gravity-Wave Observatories” (LIGO, for short), one in Livingston, Louisiana and the other in Hanford, Washington, funded by the National Science Foundation and operated by CalTech and MIT. According to scientists at the observatories, the telltale signals they detected were created when two massive black holes–each about 30 times the mass of our sun, orbiting each other 1.3 billion light years from earth–spiraled in on each other and collided at nearly half the speed of light, forming a single massive black hole and in the process, converting a portion of their mass to energy in the form of a gravity wave. The gravity wave, which was emitted back when our ancestors were still just single-cell organisms here on Earth, traveling at the speed of light, finally arrived just a few hours after the observatories had gone on line, arriving approximately seven milliseconds apart at the two observatories.

Last Saturday, my wife and I attended an open house and tour at the Hanford facility. After a presentation by one of the resident scientists, our group was led on a tour of the facility, where we had a chance to observe the construction and layout of the detector tubes, tour the control room, and talk first-hand with the scientists on site.

The facility at Hanford (as well as the identical facility in Louisiana) is comprised of two, four-foot diameter, 21/2-mile long stainless steel tubes, oriented perpendicular to each other in the shape of an “L”. A 200 Watt infrared laser directs its light at a beam splitter at the vertex of the “L”, thereby causing the laser beam to be split into two beams, which are simultaneously directed down the length of each leg of the “L”, reflected at the ends of the legs by precision mirrors, and returned to the beam splitter and recombined.

So what exactly does a gravity wave do and how do the LIGO detectors detect them? Put simply, as a gravity wave passes by, it stretches space in one direction and shrinks it in a perpendicular direction. The LIGO detectors are designed such that in the absence of a gravity wave, the returning laser beams cancel each other out, but in the presence of a gravity wave, as the legs of the “L” fluctuate in length by a tiny amount (a really, really, tiny amount!), the two returning laser beams interfere with each other, producing a signal that’s picked up by a photodiode detector.
The sensitivity of LIGO is a function of (among other things) the power of the laser and the length of the detector arms. So to increase the sensitivity many times over, the laser system incorporates “power recycling” mirrors placed between the laser source and the beam splitter, which boost the effective power by a factor of 3,750, bringing the total power to 750,000 watts.

Similarly, additional mirrors are placed near the beam splitter, which reflect each laser beam back and forth along the 21/2-mile tubes 280 times before they merge with each other, thereby bringing the effective length of each tube to 700 miles.

So what will scientists be able to do with gravitational waves….why is their detection considered important? At a fundamental level…..the detection is important, not simply because it confirms another prediction of general relativity, but because it advances our fundamental understanding of the universe we live in…and moving forward, the ability to detect gravity waves gives astronomers an entirely new tool with which to study the universe. Practical applications? Well, that might be a bit more of stretch…certainly, some of the highly-advanced technology that had to be developed in order to build a detector capable of observing gravitational waves may have practical applications in the future…but the primary value—in my opinion—is the advancement of scientific knowledge that the project has made possible.

Following are a few photos from our tour on Saturday, followed by a link to the website for LIGO at Caltech, and an article in the NY Times that provides an interesting glimpse into the history and development of the project: 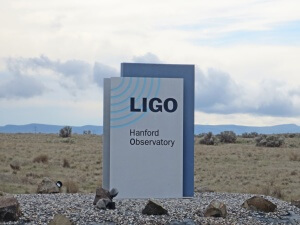 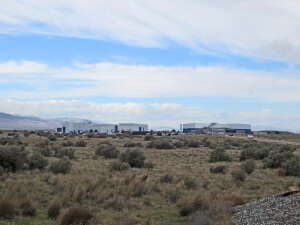 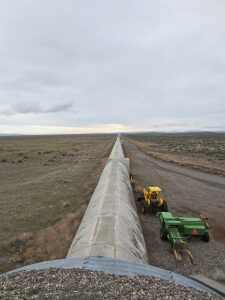 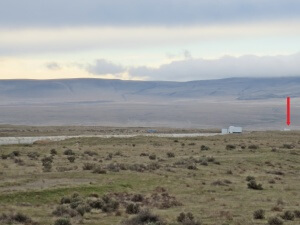 West leg of detector; red arrow shows far end of detector leg…21/2 miles away. The legs of the detector—and, specifically, the beam tubes within the legs–are long enough that the curvature of the earth (more than a meter over the length of the tubes) needed to be accounted for when leveling the pads on which the beam tubes are mounted. 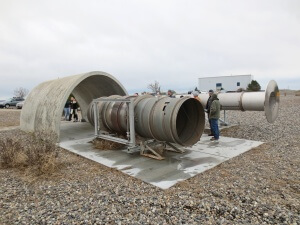 Exhibit showing a segment of the concrete enclosure and the spiral-welded, 3-mm thick, stainless steel tube.
The tubes in the detector are maintained at a vacuum of 10-9 torr—that’s one trillionth of an atmosphere! To achieve the necessary vacuum, the tubes were heated to 300 to 340°F for 30 days to drive out residual gas molecules, while the tubes were being evacuated using turbo pumps. The vacuum is maintained by ion pumps and liquid nitrogen cryopumps. Stiffener rings on the outside of the tubes prevent collapse due to buckling, while stainless steel bellows between adjacent segments accommodate thermal expansion and contraction. 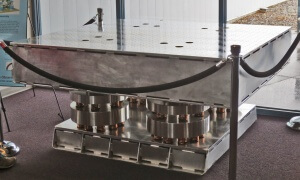 Exhibit showing portion of Seismic Isolation Assembly Seismic isolation was a major concern in the design of the system and is accomplished by a number of systems, both passive and active. 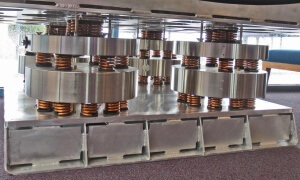 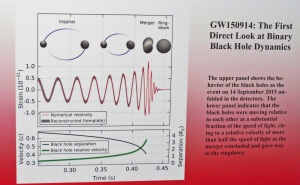 Graphic showing the black hole inspiral and merger event responsible for the gravitational wave detected on September 14, 2015. According to Kip Thorne, a theoretical physicist from CalTech and one of the scientists involved in the development of LIGO, when the black holes merged, they converted the equivalent of three solar masses into energy—which, according to the energy/mass equation, E=mc2, is a huge amount of energy….a really, really huge amount of energy! ….to the extent that upon merger, over the course of about 20 milliseconds, the energy output exceeded the energy being emitted by all the stars in the known universe…by a factor of 50! 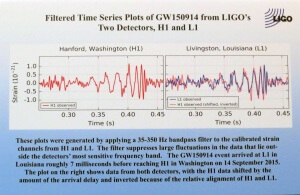