I’ve been preparing for the Intro to Failure Analysis course that Mark Lisin at Lisin Metallurgical Services and I are teaching for ASM Oregon at University of Portland on Friday of this week, and in so doing, I’ve been looking back at some of the really interesting failure analyses we’ve done at VGO over the years. So I thought I’d follow-up on last week’s blog post by Bob in which he discussed how different fracture mechanisms appear distinctly different in the SEM….and the previous week’s blog post by Mattea in which she describe how to preserve important features on a fracture surface, and take a look at one of the failures we investigated a few years ago where an examination in the SEM showed how a mix up in material led to quite a problem.

Our client had been purchasing small, two-man aerial boom lifts for a specialized apparatus they were building for which they removed the man basket from the boom lift and installed an un-manned, material-handling device of their own. The device was secured to the aluminum boom by means of an aluminum weldment that had come with the boom lift. Everything looked great until they went to use the device, at which point the weldment failed catastrophically, fracturing at several locations, into approximately a half-dozen pieces. Fortunately, no one was hurt–which of course might not have been the case had the unit been used for its original purpose with workers suspended in the air! Our assignment was to figure out what had gone wrong.

The first thing we noticed was how brittle the fractures appeared when we pieced everything back together—no deformation in the weldment whatsoever, just sharp, flat fractures between the various pieces. Not only that, but most of the fractures were through the base material rather than through the welds, where you normally expect a weldment to fail. Proceeding with the investigation, we prepared several metallographic specimens and immediately noticed a highly-unusual microstructure comprised of an interdendritic distribution of intermetallic particles and aluminum alloy dendrites. Dendrites….in a wrought material…now that’s something you don’t see every day! 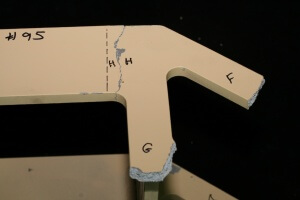 Most of the fractures were though the base material, rather than the welds

On to the SEM we went to see what the fracture surfaces looked like, and what did we find? Once again….localized areas of dendrites, clearly demonstrating that the material had undergone melting in localized areas. At this stage, we were starting to suspect a serious materials- or manufacturing-related problem, and that was confirmed once we received the results of tensile tests and chemical analysis. Not too surprisingly, the tensile tests showed that the material had very low strength and very low ductility, but what was more interesting was that the material—which was supposed to be 6061 aluminum, instead, turned out to be a 7000 series aluminum, somewhat similar in composition to (but not in conformance with) alloy 7075. Now everything was falling into place with our analysis. 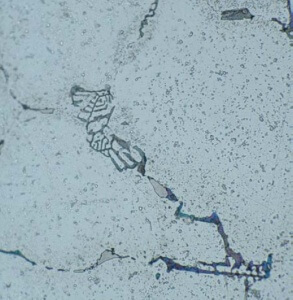 Metallographic Specimen
Microstructure was comprised of an interdendritic distribution of intermetallic particles and aluminum alloy dendrites.

So what does all this mean? Well, the physical properties of wrought, structural aluminum alloys are achieved by an appropriate heat treatment, the specifics of which are dependent on the chemistry of the material. In particular, structural aluminum alloys achieve their strength and other desirable properties by “solution treating”, followed by quenching and subsequent “precipitation hardening” during aging (either naturally or artificially).

Solution treating consists of heating the alloy to a sufficient temperature such that a supersaturated solid solution of the constituents is achieved. Rapid quenching from the solution temperature then produces a structure, which, upon aging (either naturally at room temperature or artificially at elevated temperature of a few hundred degrees F) results in precipitation of hard particles, giving the alloy its desirable physical properties. 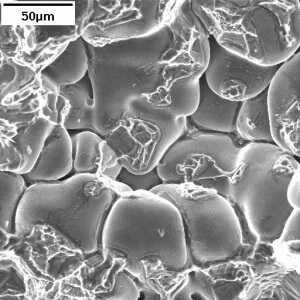 As a follow-up to the failure analysis, we went to the client’s site and inspected several other brand new units (from the same manufacturer) with an eddy current instrument, configured to differentiate between 7075 and 6061 aluminum alloys. All the other units were 6061 as specified.