One of the things I like best about being retired is the opportunity it affords to travel…meaning, in my wife’s and my case, road trips in the United States and Canada. So far, in the year and ten months since I retired, we’ve put around 50,000 miles on our vehicle, including an extended trip to the desert southwest (sure was hot in Tucson in early summer!) and an extended trip through Canada to New England (sure was wet and infested with ticks last spring!). But one of our trips was quite a bit closer to home, a tour of the B Reactor at Hanford last fall, which is the subject of this blog. 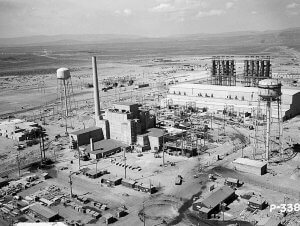 The B Reactor—which has been designated as a National Historic Landmark by the National Park Service– was the world’s first industrial-scale nuclear reactor. Built during World War II as part of the top secret Manhattan Project, the reactor produced the plutonium used in the world’s first nuclear explosion, the Trinity test in New Mexico on July 16, 1945, and the plutonium for the bomb dropped on Nagasaki Japan on August 9, 1945. 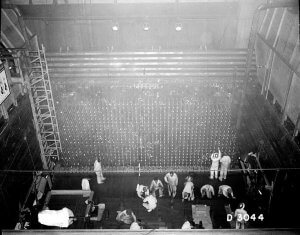 Front face of the reactor during construction

The reactor itself is remarkably simply, with a core basically consisting of a gigantic pile of machined graphite blocks (called, creatively, a “pile”), each measuring approximately 4 inches square by 48 inches long…in particular, 100,000 of them, weighing about 2,000 tons in total, configured in a rectangular, 28-foot deep (front-to-back) by 36-foot wide by 36-foot tall block, surrounded by 10 inches of interlocking cast iron blocks and 4 feet of Masonite, steel, and concrete for shielding. 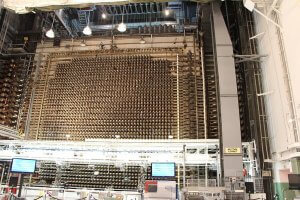 Front Face of the reactor

Prior to assembly, the graphite blocks were precisely machined with holes, which were then aligned upon assembly to create 2,004 horizontal thru-holes from the front to back of the core. Within the holes are aluminum process tubes, each of which contained 32 aluminum-clad, cylindrical, uranium fuel elements. Removable end-cap assemblies at the front and rear ends of the tubes allowed for installation and removal of the fuel elements, along with introduction and removal of cooling water, which made a single pass through each tube in an annular space between the OD of the fuel element and the ID of the tube.

Control of core reactivity was accomplished by nine horizontal control rods, inserted through holes on the left side of the core. In addition, the core contained 29 vertical safety rods, designed so that in the event of an emergency, they would be released and drop into the core to shut down the reactor.

The construction was definitely a “fast-track” project, with excavation starting in October 1943 and the building being turned over to operations in August 1944, a period of only 10 months and 6 days! (Think about that the next time you’re sitting in a traffic jam as one of our streets is being worked on for what seem like forever.) Loading of uranium fuel started on September 13, 1944, the reactor achieved initial criticality on September 26th, and the plutonium for the Trinity bomb was delivered to Los Alamos on February 3, 1945.

So how does a weapons reactor make plutonium? The process starts with unenriched uranium, comprised of 99.3 percent U-238 and 0.7 percent U-235. Once the reactor reaches criticality, neutrons released by the fission of U-235 are moderated (slowed) by the graphite core causing them to be absorbed by U-238, creating U-239. U-239 is unstable, with a half-life of 23 minutes, and decays by beta emission to neptunium 239, which is also unstable, with a half-life of 2.3 days, and decays by beta emission to plutonium 239, the isotope used to make bombs (i.e., the whole point of building the reactor). 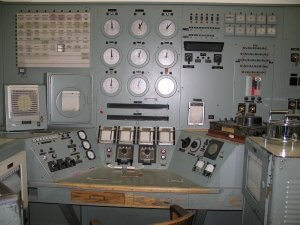 Although the principle is relatively straightforward, in practice it’s a bit more complicated because, if left in the reactor too long, the plutonium 239 will absorb neutrons and become plutonium 240, which is undesirable in a bomb because it emits so many neutrons that it can cause a bomb to detonate before reaching full criticality, thus severely reducing its yield. The neutron flux in the reactor controls the rate of plutonium production and is a function of position within the core. So the tricky part is knowing just how long to leave the various fuel elements in the core before removing them for processing. As you might imagine, the instrumentation used to monitor the process was considerably less sophisticated back in the 40’s than it would be now; in total, the B reactor utilized some 5,000 monitoring instruments. 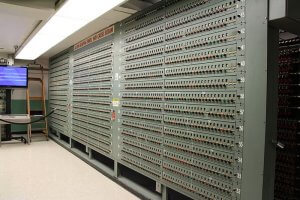 Row upon row of monitoring instruments

After the war, the B reactor was shut down, but then, as tensions from the Cold War increased, it was started up again in 1947 and operated for more than 20 years before being shut down for good in February 1968. During its service, the B Reactor, along with eight other, newer reactors at Hanford, plus five subsequent reactors at Savannah River in South Carolina produced about 115 tons of plutonium. To put that into perspective, you might ask how much plutonium it takes to make an atomic bomb? Well, the plutonium bomb dropped on Nagasaki contained about 13.6 pounds of plutonium, and according to one web site I found, current plutonium bombs might require on the order of 4½ to 9 pounds. So, let’s see, if the United States has produced 115 tons of plutonium, and it only takes 10 pounds or so to make a bomb, how many bombs could we make?…..well, you can do the math if you like, but the bottom line is it’s a really large number. 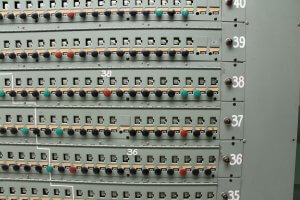 The tour itself was very interesting, lasting some four hours (including a 45-minute tour bus ride each way from the meeting location in Richland to the Hanford site and back). Once on site, we were taken to the imposing front face of the reactor with its huge array of 2,004 fuel rod ports. There, a knowledgeable staff of volunteers described the construction, configuration, and operation of the reactor. We were then allowed to wander through the facility on our own to various locations such as the control room and cooling water piping station, where other volunteers presented us with additional information and answered our questions. All in all, it was a great way to spend a pleasant Fall afternoon. If you’re interested in learning more about the B Reactor or signing up for the tour (once the tour season starts later in the month), you can go to the website at https://manhattanprojectbreactor.hanford.gov