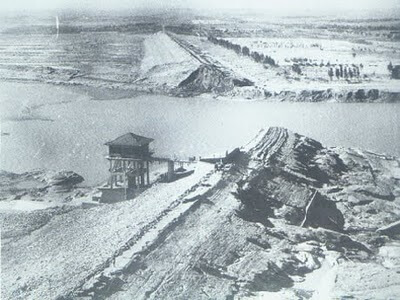 The catastrophic failure of this dam caused massive loss of life, and can be attributed to a combination of engineering and environmental factors. An official Chinese estimate of the total number of people killed is 171,000 – 26,000 from the initial flood, and 145,000 more in the subsequent epidemics and famine that occurred before the waters had receded and help could arrive. Some researchers and meteorologists suspect the death toll to be even higher. In addition, this massive structural failure occurred during an era when the Chinese government was eager to minimize the scale of negative events, leading to surprisingly little knowledge about the collapse outside Henan province, where the failure occurred – none of China’s official newspapers reported the story.

This dam was one of over a hundred dams built in the 1950’s to control flooding and for electrical power generation in Henan province alone. After a nearby flood in 1954, upstream reservoirs were extended and consolidated. Banqiao Dam’s height was increased by 3 meters, or about 9 ft 8 in. The whole dam was made of clay and stood 24.5 meters high (about 80 ft.).

Cracks in the dam and sluice gate were observed immediately after construction, due to some engineering and construction errors, but were subsequently repaired using soviet specifications. Corruption and low construction standards were thought to have played a role. One of the design engineers involved with the dams in the area was a vocal critic of the final design, criticizing, among other features, the reduction from twelve sluice gates to five. 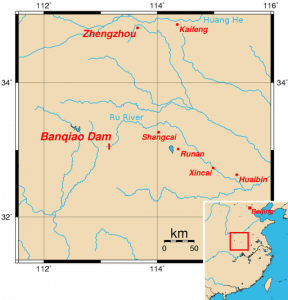 In August of 1975, Typhoon Nina collided with a cold front, causing the storm to remain nearly stationary and dumping more than a year’s rainfall within 24 hours. Concerns over downstream floods let to a decision not to open the sluice gates early in the storm. By the time the gates were opened, it was too late – water was rising faster than it could escape, and besides, the sluice gates were partially blocked with accumulated silt. Communication lines were knocked out by the storm, delaying decisions to open the gates and preventing large-scale evacuation of the valley below.

When the dam gave way, a tidal wave travelling more than 30 miles per hour washed over the valley, taking out 62 other dams and inundating seven county seats. After the failure, many downstream dams and reservoirs were bombed to allow the waters to escape and rescue efforts to commence. 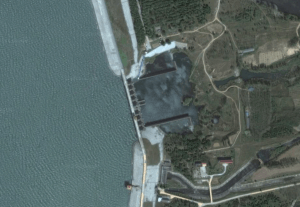 https://www.internationalrivers.org use under Creative Commons License